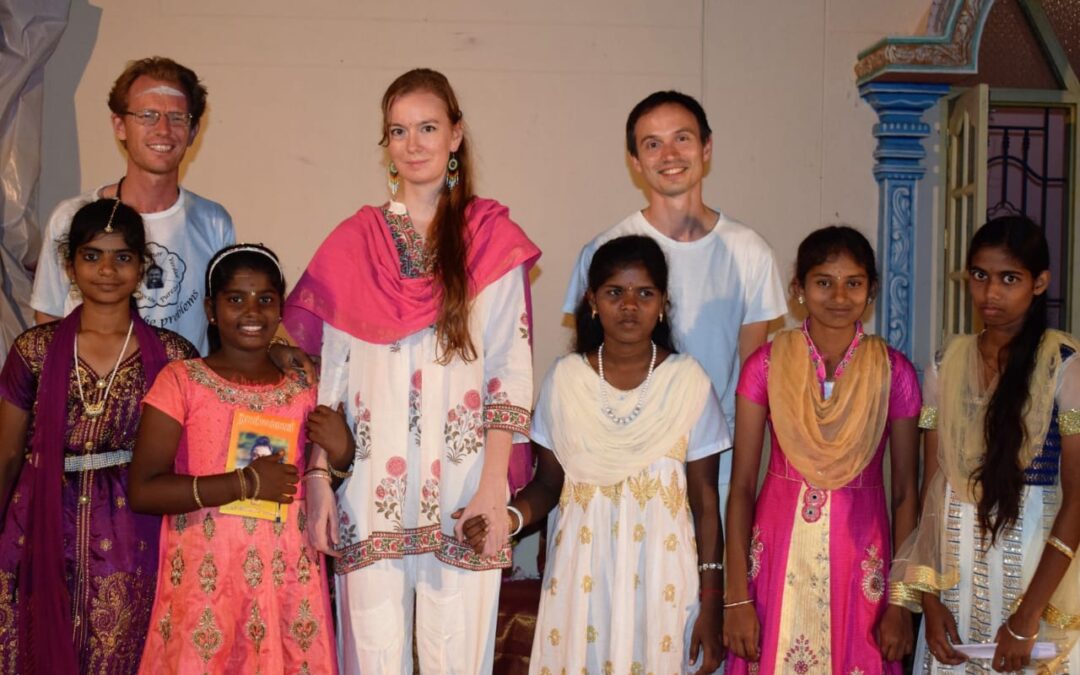 Heleen, Research Master in International Development, was selected by her master’s professors to attend the CERES course. Her research took place in Tamil Nadu, India, where she worked in several (boarding) schools catering to marginalised children. We asked her to answer the interview questions in writing.

Why did you decide to do research?

It’s quite a long story. When I studied Psychology in Maastricht, I was asked to join MaRBLe (bachelor’s excellence program for research). I was over the moon and immediately started developing several ideas for research. All I had to do was pass “statistics 2” and decide on what I wanted to do. The following week I was diagnosed with an intestinal parasite. The treatment would weaken me physically, so I requested it to start after my statistics 2 exam, but the doctor urged me to treat it as soon as possible. Meanwhile, discussions were ongoing for the MaRBLe research, but none of the options felt like a positive contribution to the world or existing knowledge. The medicine gave me increasing stomach flu-type symptoms, including a fever that kicked in 30 minutes after taking the medicine. The study advisor gave me permission to miss 40% of the classes while the treatment was ongoing. I was determined to meet my 60% attendance no matter what. That way I could still take the exam in the resit if need be. By the end of the course I slept on average 22h/day and a month later, I had my first near-death experience. Another 3 months later I was diagnosed with a second parasite in my liver.

Cold was one of my worst enemies, the smallest touch of cold air would skyrocket my fever. My brother lived in India at the time, volunteering in an orphanage, where a French parasite specialist with 30 years of experience would visit to treat the children and volunteers. A Belgian/American nurse was willing to escort me to the orphanage, where cold is found only in fridges, if you’re lucky.

The 75-year-old French parasite specialist received me in my first few days in India and worked on healing my body and curing it from the parasite for nearly my entire 3-month stay. Fortunately, the heat and her treatments made it possible for me to work with the children in the orphanage from time to time. Although we couldn’t understand a single word of each other’s languages, my affinity with the girls increased by the week. They would teach me songs, bring me clothes in need of fixing and come read their textbooks (in Tamil) to me. It took years for me to physically be able to function in anything close to a normal capacity, but every year I would go back to the orphanage for 3 months to visit the children. Those 3 months were the highlight of my year.

Four years after my initial diagnosis I started playing the piano at a frequency that made me curious whether that was maybe something I was now physically able to start at least as a hobby, a way to slowly phase back into a kind of normalcy. At the time I had moved to Paris to live with my boyfriend. Classes at a higher level are only taught in the conservatory or to <20-year-olds outside of the conservatory. So I decided to enter the selection procedure, only to have something to work towards and receive feedback from amazing pianists/teachers I would otherwise never get close to. They ended up selecting me; that’s not an opportunity you can turn down. I enrolled, was able to see how inspired and tirelessly musicians work. It showed me the way hard work should be done, with passion and perseverance.

My inspiration for returning to research came from a Beijing musician with whom I mostly communicated over google translate. Besides being a great clarinettist, she had an incredible business mind. She wanted to start a business together. Chinese children studying music would come to Paris, we would give them master classes and not only teach, but also show them the lives of the composers. She even recorded an ad that was run on TV in China.

While developing the idea, I remembered the cultural exchange I had been on after high school in Panama and the impact that had had on my life. If we did the same in France or Belgium, and have the Chinese children mingle with them, they could learn so much more about the world and different cultures. It was my belief at the time that if people would be open to, or genuinely understand other cultures, people would be more welcoming and open to other views and opinions. She was convinced she could already persuade her Chinese audience with the initial proposal. The promise of including European children would only persuade Chinese parents further to send their musical prodigies. However, that would not be the case for European children. The only way I could think of in which French/Belgian parents would trust a new over an already established national initiative with their children is through science. I found a research I felt passionate about: the impact of cultural exchange. I then went to India for my annual 3-month-long promise to the children, came back, heard the prices my friend was proposing to charge and decided that was not the audience that needed more opportunities.

The Tamil children I had watched struggle, grow up, sing; those were the children for whom I wanted to find a way to make life easier. I didn’t know exactly how, but I did know what to do. I emailed the university to ask if my credits were still valid and re-enrolled. As soon as classes started I approached the professor that had invited me for MaRBLe years before. When I told him the story he asked what part of India I wanted to do my research in. There happened to be one specific region in India that captured his heart, Tamil Nadu, right where the orphanage lays.

In my bachelor I did 5 small tests with the children, Rosenberg Self-Esteem Questionnaire and Missionaries & cannibals problem (changed into snakes and peacocks) on the laptop, forward & backward digit span, marshmallow test, and an open ended, qualitative written test I called “inner values” in which they responded to 3 open questions elaborating on their values.

I analysed everything, but my thesis ended up only discussing the Rosenberg Self-Esteem Questionnaire and still had over 30 pages of analysis in appendix.

I learnt so much more in the 3 months in India that year, than I did in all the years prior. There were scientifically-compelling conclusions, but little that would help the children. Perhaps, researching several locations would offer more solutions and maybe my master could build on it?

Psychological research is the study of details within individuals, which is interesting, but on its own, difficult to achieve in what I was looking for. For my master I knew I wanted to go further, try again, interdisciplinary this time, find something that I could do that could make any positive change in their lives, no matter how small. I stumbled upon International Development Studies. My MaRBLe(ous) professor wrote me a glowing review that got me an interview for the research program and once again I was able to go to India and try to find something that could help make their lives easier. This time I researched with mixed methods, (or nearly all methods possible); interviews, anonymous notes, anonymised digital questionnaires, photo voice, expressive art project, … and in several locations, all about the children’s wellbeing, anything that could make it easier for them to get to the core of something they needed. While in the field, several clear problems came up, specific to each location, and after analysing the interviews, some problems were omnipresent. Once again, I have more research material than words allowed in the thesis and am unable to include the material from my bachelor, though it did shape the master’s research. But this time the children told me what they needed, teachers told me what they needed, wardens told me what they needed, even government officials told me what they needed and I could summarise their answers, anonymise them, make it possible for the right people to get the information in a safe way. This is what I love about research. Maybe there is a lot more data you could have used, but everything you learn informs you further and there is always more to learn.

What is the subject of your research?

Wellbeing of marginalised children in the education system in South India.

How CERES helped you to develop your research?

Coming from Psychology and Neuroscience, International Development Studies felt like navigating a minefield of misinterpretation. I would misunderstand what courses would be about even after having read the entire course book. Methodological, theoretical (initially one of my greatest struggles) and practical aspects of the research are discussed on a personalised level during CERES’ training. Each module allows you to bring in struggles you experience, as well as expose and dismantle mines you might experience later in the process.

What would you suggest to students that want to become researchers?

Find the topic you are passionate about, something that gives you energy, makes you want to persevere and work on for at least the coming years.

For aspiring qualitative researchers, make sure you like categorizing and don’t get frustrated easily from re-reading the same thing 30 times. Work on becoming an expert interviewer. Reading your interviewee or focus group correctly will change your life. Apply to courses on it (like the CERES course) to give you a head start.

Quantitative researchers, place high value on statistics. It makes or breaks not only your research but also your reputation. SPSS and Excel should be your best friends. Finally, don’t forget to enjoy yourself and take a break from time to time; your laptop needs a break from you too sometimes.