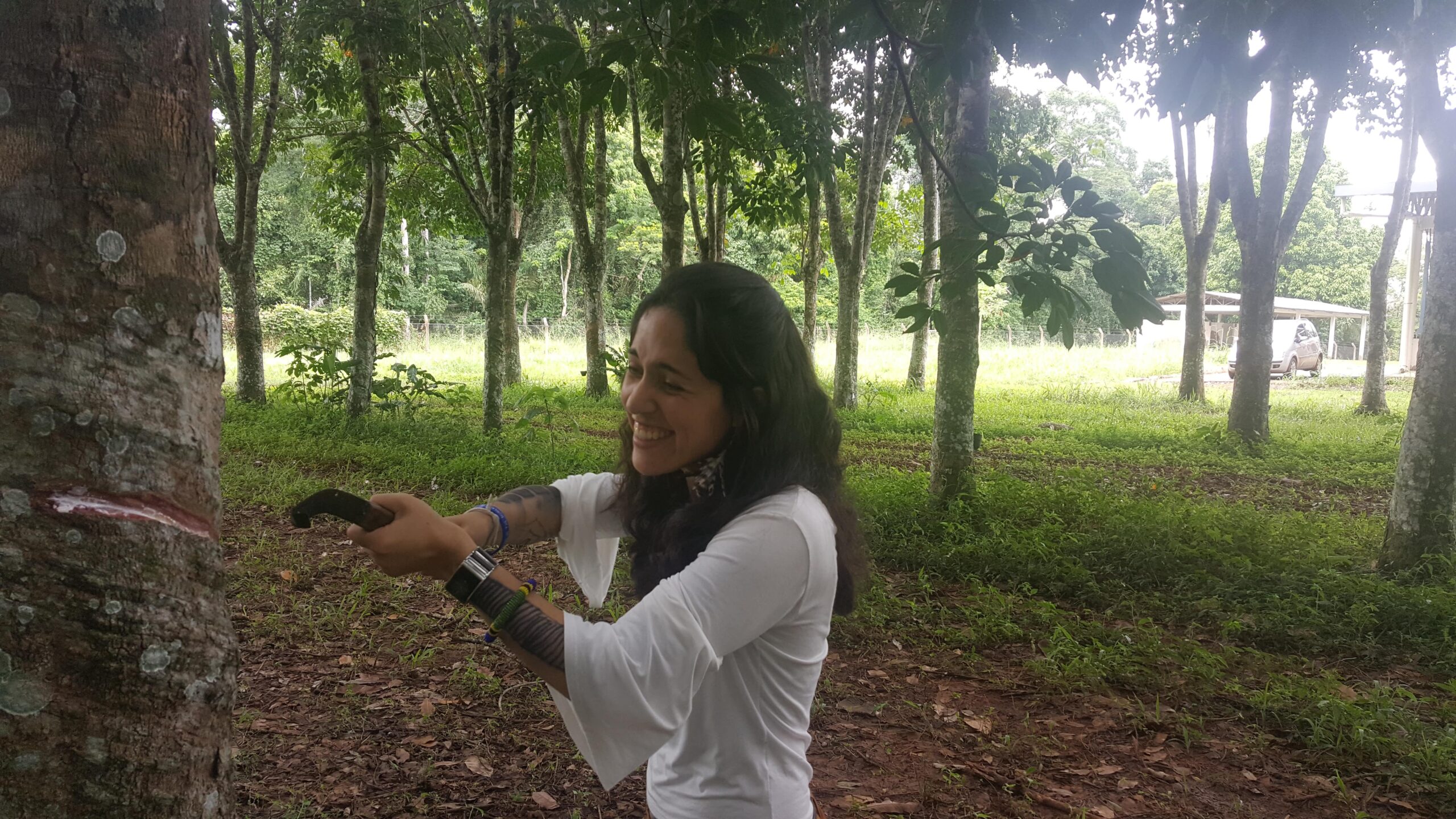 Why did you decide to do a PhD?

I always liked to study and I am very curious about different topics. When I was doing my bachelor in Product Design, I lived with some girls who were doing a PhD. Their presence somehow inspired me to study more. Later, I did a Master in Production Engineering. By that time, I was working as a Jewelry Design Coordinator, and doing some consultancy in design and engineering, until I started to work as a lecturer at the university. To become a professor was never my first idea, but the relationship with my students made me realize I have some talent to teach. Therefore, doing a PhD was a logical step in my career.

What is the subject of your research?

Good question! As Einstein said, “If we knew what it was we were doing, it would not be called research, would it?” In this sense, I guess, I believe, I think… I am researching about “The social shaping of technologies of Amazonian native rubber in global value chains for fashion”. At least, this is the name of my thesis!

How CERES helped you to develop your research?

I was confused in my PhD, which is a moment many students deal with. As I am doing a double degree PhD, in Production Engineering (Federal University of Minas Gerais, Brazil), and in Development Studies (International Institute of Social Studies, Erasmus University of Rotterdam), I needed to find some convergence between different approaches and methods. At CERES, I understood better the process of developing the research problem, questions, objectives, research methods. In addition, some specific courses, like a class about ontology and epistemology, helped me to update my literature review.

What would you suggest to students that want to become researchers?

First, read, read, and read. Second, find ways to stimulate your creativity by doing different activities, like going to scientific conferences and art exhibitions, and boosting your career with extra courses and workshops. Third, be inspired and motivated by other people’s journey and by your own goals. I believe that the inner process of self-awareness to become a researcher comes first than finding the right university, research line and supervisor, which of course is very important.

This proposal presents critical research understandings for sociotechnical systems of native rubber in the states of Acre and Amazonas, in Brazil, inserted in two global value chains (GVC) driven by French companies. Three case studies are presented: (1) the “vegetable leather”, a canvas made of cotton covered by native rubber for luxury bags of Hermès; (2) the Liquid Smoked Sheet (LSS), a rubber material for the soles of Veja shoes; and (3) the Cernambi Virgem Prensado (CVP), a conventional rubber, also for Veja shoes.The first material was produced in 40 production units in the forest, employing groups of rubber tappers and indigenous peoples, such as Kaxinawás and Yawanawás. The second material was developed by a PhD in Chemistry and employed rural farmers as well as the indigenous group Shanenawá. Finally, the third material is being produced by around 800 rural farmers.

Each material produced and its social organization consist in three different sociotechnical systems. They have in common some elements, like key actors, cooperatives, NGOs, international funds, public policies, and the same reason to exist: they are the beginning of GVCs for fashion. In addition, they face the same challenges because of their locality, the Amazon forest, such as communication, logistics, the different cosmovisions of the workers (indigenous peoples and rural farmers), and the fact that the level of sunlight, of rain and funghi affect the quality standard of the materials. Therefore, to scale the production is complex and depends on many adjusts in the organization of the rubber sociotechnical systems.

Although it is difficult to increase the production in the rainforest maintaining the same quality standard, the actors are motivated (or driven) by three main reasons. Firstly, we have the investments in the name of sustainable development to avoid deforestation. Secondly, there is the belief that the fashion market will have a long cycle, therefore the companies and NGOs need to scale the rubber production to attend the supposed demand. Finally, some key actors, humans, assumed, in the previous fieldwork, that a non-human actors, for example latex, has agency, “it is alive”, and it needs to be controlled by technology in order to make rubber commercial.

That said, the central question of this research is: How humans and non-humans shape the technological development of Amazonian native rubber materials in global value chains for fashion? In this sense, we have the following five empirical questions. How is the power asymmetry in the sociotechnical systems in the forest, considering the full extent of the GVCs? How does a group of stakeholders (eg Brazilian and European businessmen; NGOs; researchers; community associations; government) determine the work of local Amazonian actors in the sociotechnical systems of rubber? How do the understandings ​​of native rubber materials change in the GVCs? How is the paradigm of technological development for sustainability, of the rubber GVC for fashion in the Amazon, is established (or not) as theory and practice? Finally, how can a non-human actor have agency to influence the technology?

Most of the scientific literature related to the study of native rubber from Western Amazon is focused on the performance of technologies, the rubber market, and social studies about the colonization and work conditions of rubber tappers and indigenous people. In addition, for many decades the Amazonian ethnology was marked by the worn-out antimony between “nature” and “culture”, and also the global value chains are presented as linear structures where nature is a resource.

Thus, a critical investigation into the social shaping of Amazonian rubber technologies, inserted in global value chains where humans and non-humans are understood in the same epistemological level is timely. As this research is situated in the field of Social Studies of Technology, in a double doctorate in Production Engineering and in Development Studies, three main debates are fundamental to comprehend the object of analysis. Initially, the case studies are presented as sociotechnical systems. They are critically described having the literature of social shaping of technology, as well as through ethnographies and discourse analysis. A second layer of analysis situates the case studies in the beginning of two global value chains for fashion. Three transversal concepts appear more explicit in this level of analysis: the challenges of the scale production; the neo-colonialism of rubber tappers via the discourse of sustainability (named seringality); and the agency of the non-humans, such nature and artifacts.  Finally, the third layer of analysis presents the recent historical context of native rubber development, highlighting critical thinking on the making of development in the Amazon and opening the discussion to imagine possible futures, or ontologies, for technological development in the forest. The theoretical and empirical importance of this study lies in the interdisciplinary contribution to reflect beyond the linear structures of global value chains.